The iconic image of Ha Long Bay's karst peaks jutting from the blue waters epitomises the unique and incredible beauty of Vietnam. The stunning scene has a mythical attractiveness which reflects its depiction in local folklore. According to the age-old tale, Ha Long Bay was created by the descent of a mother dragon that, along with her children, came to protect the bay against a fearsome invasion.

It is said that the dragons spat emeralds from their mouths towards their enemies and that those jewels transformed into the jewel like islands and islets. It is from this legend that the area takes the name Ha Long Bay which translates as “Bay of the Descending Dragons”.


Although the surroundings would lead you to believe this captivating tale, the bay and its fascinating rock formations were actually formed through millions of years of creation and erosion.
Over the course of time, the ocean has eaten into the limestone rocks, leaving behind the hundreds of islands, some of which are laced with elaborate cave systems. 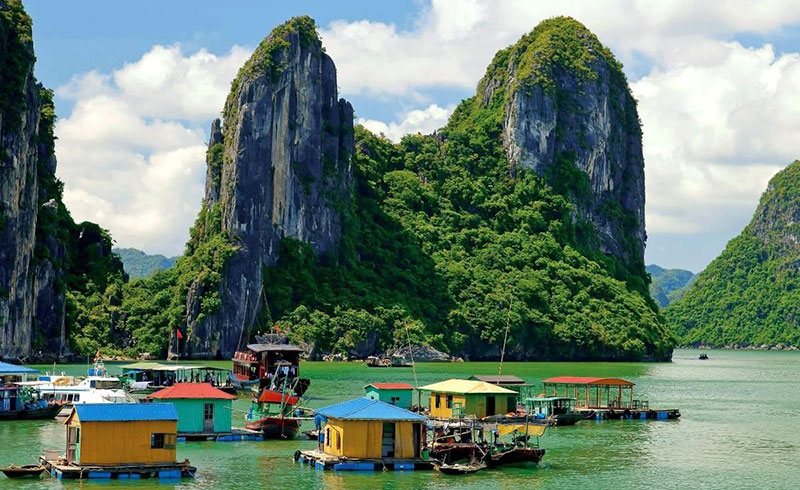 Several thousand people still make their home on floating villages throughout the bay
Ha Long Bay was awarded the title of UNESCO World Heritage Site in 1994, which has helped to protect the area. The best way to see this natural wonder is by taking a cruise around the bay, and there are a number of different options available to suit all time frames and budgets. Apart from the one-day tours, most trips involve at least one overnight stay on-board the boat, giving people the added bonus of seeing the sunset and sunrise over the sparkling waters.
Most tours also offer kayaking and visits to the magnificent caves, as well as visits to the floating villages scattered around the bay. Ha Long Bay also acts as a gateway to Cat Ba Island and the equally beautiful bays of Lan Ha and Bai Tu Long which sit on either side. 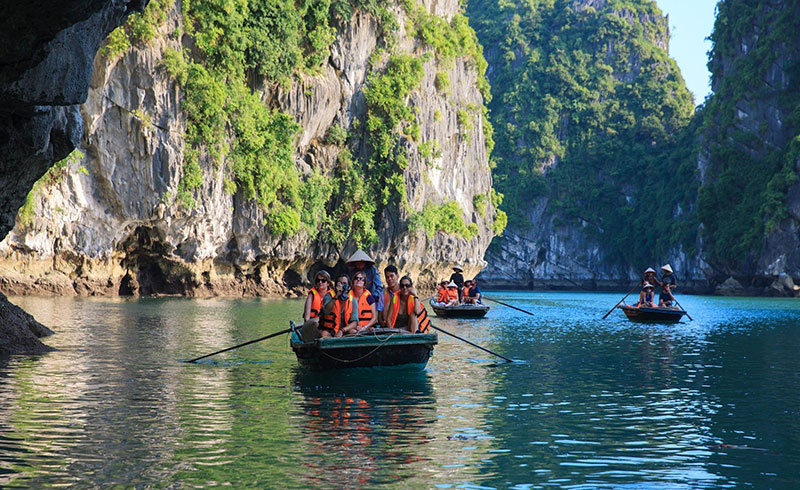 One of many activities to enjoy in the bay is going on a boat trip to one of the caves or floating villages
Although Ha Long Bay can be visited year round, the distinctive seasons in the north of Vietnam mean that the area has a very different atmosphere depending on when you choose to visit. Like most of Vietnam, the winter is cool and dry and the summer is hot and wet with occasional storms. Winter in Ha Long Bay lasts from November to April, often with a low-hanging mist shrouding the bay in a mysterious atmosphere.

The summer season lasts from May to October with high temperatures making it better for water-based activities such as swimming and kayaking. In the peak of summer, during August and September, the bay can experience typhoons which sometimes result in the cancellation of trips, so you may wish to consider this when planning your holiday.